Founded in 1842, the Indiana University Maurer School of Law is the ninth oldest law school in the U.S. and the first state school in the Midwest. Located in a beautifully wooded setting in Bloomington, a classic college town, the IU campus is consistently ranked among the most beautiful in the nation. Our heritage is local, but our presence is global: More than half of our graduates find jobs outside Indiana. 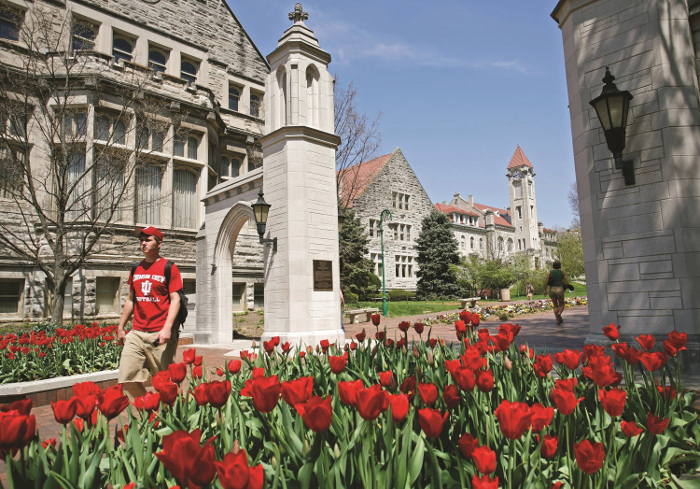 A proud history, a promising future

175 years of growth and change have shaped the character and reputation of Indiana Law.

The school opened in 1842 as the first state university law school in the Midwest. Upon founding the Law school, university trustees stated their intention to create a school that would be "inferior to none west of the mountains" that would prepare students to combine superior scholarship with ethics.

On Dec. 5, 1842, Professor David McDonald gave his first lecture to the class of the new Law Department of Indiana University, the ninth law school in the nation and first state law school in the Midwest. There is no record of how many students were in that first class, but there were five in the first graduating class in 1844.

Through the early years, the Law Department flourished under the direction of McDonald and other distinguished jurists, and following the Civil War enrollment soared, graduating 32 in 1871, more than half of the total graduates of the university.

In 1889, the trustees reestablished the law department as a law school, naming David D. Banta as its first dean. The Association of American Law schools was formed in 1900, and Indiana Law was one of the 25 charter members of this group. The law school enrollment stood at 125 students in 1900, and there were three faculty and a law library of 4,000 volumes. In 1908, Indiana Law moved to Maxwell Hall, where it would remain until the mid-1950s.

Progressive from the outset, Indiana Law graduated its first woman, Tamar Althouse, in 1892, its first Asian-American, Masuji Miyakawa, in 1905. Sam Dargan, its first African American, graduated in 1909. Indiana Law’s international program began with numerous students from the Philippines graduating in 1907, and its LLM degree was established in 1919.

In late 1925 the law school launched the Indiana Law Journal, and the first student editorial board included Pearl Lee Vernon, Indiana Law’s only woman at that time, who graduated first in her class.

During the 1930s and 40s, under the deanship of Bernard Gavit, Indiana Law rose to be among the finest law schools in the nation, with legendary faculty including Jerome Hall, Fowler Harper, Ralph Fuchs, Frank Horack, and Austin Clifford. When World War II broke out, enrollment dipped to the lowest since the 1870s, with only 23 students enrolled in 1943-44. Following the war, the Law School's enrollment exploded, reaching 416 in 1948-49, and in response, the law school added 13 distinguished teachers and scholars.

By the 1950s, Maxwell Hall was not large enough to hold the growing school. Dean Gavit began planning a new building, but poor health forced him to resign the deanship. Leon Wallace, a professor since 1939, was named dean in 1952 and took up the plans. "The Mad Monks of Maxwell" as the law students had become known, would begin their classes in the new law school building in the fall of 1956.

During the 1960s and 70s Indiana Law was led by Deans W. Burnett Harvey and Douglass Boshkoff. Admissions criteria became more selective, and the law school increased its emphasis on excellence, appointing a large number of young faculty with top credentials. In 1972, the enrollment stood at 617.

In 1977, the university administration renewed its commitment to the law school, promising Dean Sheldon J. Plager a broad package of improvements, including additional faculty positions, higher faculty salaries, improved funding for the law library, and a $12.6 million building addition and renovation project.

An impressive roster of faculty and students continues to place Indiana Law as one of America’s leading public law schools. In 2006, Indiana Law set out on a strategic plan set to advance the school and its students through a commitment to excellence in teaching, scholarship, and public service, and a mutually supportive relationship with an outstanding research university.

The law library still claims to the bill as one of the nation’s premier legal research facilities. The clinical program and interdisciplinary research centers such as the Center on the Global Legal Profession, the Center for Intellectual Property Research, the Center for Constitutional Democracy and the Center for Applied Cybersecurity Research are charting new ground for the Indiana Law tradition.

Lauren Robel was named dean of the Law School in 2003, the first woman to serve in that role. An alumna of the school, she had been a faculty member since 1985 and associate dean since 1991. Under the direction of Dean Robel, a $25 million grant from Lilly Endowment Inc. in 2007 enabled Indiana Law to attract and retain exceptional teachers and scholars and to establish the school as one of the very best public universities in the country.

The Maurer School of Law

In December 2008, IU President Michael A. McRobbie announced a $35 million gift to the law school from alumnus Michael S. Maurer, JD'67, and his wife, Janie. The school was renamed the Michael Maurer School of Law in recognition of the Maurers’ support.

Maurer related the significance of his donation to his relationship with Indiana Law. "This gift is special for me because it is an opportunity to say thank you to an institution that made possible the success I have enjoyed in my legal and business career, the IU School of Law in Bloomington," he said. "Janie and I make this contribution to the law school with confidence in Lauren Robel, who has served our school so well. We fully expect under Dean Robel's guidance that this school will be recognized as an elite institution and assuredly one of the finest public law schools in the nation."

The 2010s: Strategizing for the future

In 2012, Dean Robel was appointed provost of Indiana University Bloomington and executive vice president of the university. Executive Associate Dean Hannah Buxbaum served as interim dean until January 2014, when Austen L. Parrish was named dean of the law school. A former vice dean and interim dean of Southwestern Law school in Los Angeles, Parrish and the faculty have developed new strategies for the school’s long-term prosperity.

In May 2014, the law school received its third eight-figure gift: a $20 million estate gift from Lowell E. Baier, JD’64, for purposes of long-term facilities development. The law school building was named Baier Hall, and, at his request, the law library was named the Jerome Hall Library in honor of Baier’s favorite professor and longtime mentor.

“I am deeply honored by the opportunity to make this gift to the law school,” said Baier. “In particular, I am pleased that the library will be renamed in honor of Professor Hall, whose teaching and mentoring were so crucial to my success as a student, and whose wisdom has continued to guide me throughout my career. This gift will ensure the continuing integrity of the law school building and the law library, its very soul, inspiring the best in academic and scholastic achievement -- remember, a sense of place creates a sense of purpose.”

With the tremendous generosity of its alumni and friends, the dedication and commitment of its faculty, and the talent and tenacity of its students, the future of Indiana Law looks brighter than ever.